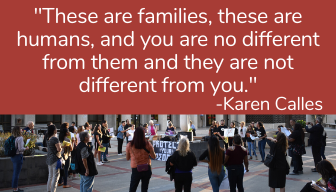 Urging San Mateo County officials not to cooperate with U.S. Immigration and Customs Enforcement, dozens of individuals representing community groups and faith-based organizations filled the county’s board chambers Wednesday with concerns about sharing information about county inmates with the federal agency.

In light of a state law that took effect in 2018 and restricted local law enforcement agencies’ ability to respond to the federal agency’s requests for information on inmates, San Mateo County Sheriff Carlos Bolanos said officials have been monitoring the department’s policies to ensure they are within the new laws and maintain public safety. Acknowledging Senate Bill 54, also known as the California Values Act, has not significantly altered the standard procedures of the Sheriff’s Office, Bolanos said his office does release information to the federal immigration agency for individuals convicted of serious or violent crimes and in specific instances as outlined by the law when a misdemeanor would qualify.

Bolanos added the passage of Assembly Bill 2792, or the Truth Act, had the greatest impact on the county’s correctional facilities because the Sheriff’s Office was required to notify inmates of the federal immigration agency’s requests to interview them and also that the interviews are voluntary. AB 2792 also requires agencies to let inmates and their attorneys know if the agency requests information on their release dates or a transfer of custody. He explained the Sheriff’s Office does not enforce federal immigration law, hold anyone past their release date or ask individuals about their immigration status, and added the federal agency does not access any of the information it requests from the Sheriff’s Office equipment and does not have any workspace at the department’s facilities.

Between November of 2018 and August, Bolanos said the Sheriff’s Office received 610 requests for notification of inmate release dates from U.S. Immigration and Customs Enforcement, or ICE, and 46 inmates were released to the agency. Of those inmates, 36 had felony convictions, while 10 had misdemeanor convictions including assault with a deadly weapon, child endangerment, assault, battery, spousal battery, grand theft, threatening a domestic officer and domestic violence, he said.

Though he acknowledged his office does cooperate with ICE in specific instances, Bolanos said his office does so when it is warranted by the law and when individuals are a threat to public safety.

“There has been no change in our primary mission of public safety, we continue work on building relationships in the community,” he said. “The San Mateo County Sheriff’s Office is committed to providing equal service to everyone.”

As a supervising attorney with the San Francisco-based Immigrant Legal Resources Center, Grisel Ruiz expressed gratitude to the Sheriff’s Office for providing data to the community and holding a public forum. But she voiced concern about potential violations of the California Values Act the nonprofit identified in which the basis of handing someone in the county’s custody over to ICE was either a simple misdemeanor or a non-serious, non-violent crime sentenced as a misdemeanor under Proposition 47.

Ruiz encouraged county officials to consider not cooperating with ICE in the future, a move she said Santa Clara County took earlier this year after a monthslong review process. She pointed to reports showing sanctuary policies are safer and result in lower crime rates, and added if officials decide not to cooperate with ICE, it could mitigate confusion and fear among immigrant communities as well as reduce the county’s chances of violating SB 54.

Ruiz also emphasized the effects the increasingly hostile political climate at the national level has had on immigrant communities, and noted those who are handed over to ICE often don’t have access to legal representation and can be subject to mandatory detention.

San Mateo County resident Nora Melendez said she and her three children were separated from her partner for more than eight months after he was turned over to ICE from the Maguire Correctional Facility in December of 2018. Melendez said her partner was taken to an ICE detention facility in Bakersfield more than 250 miles away, and it cost $37,000 in legal expenses and other costs to bring him back home.

Melendez was joined by dozens of others who challenged county officials to end cooperation with ICE, noting that even though her partner has been home for three months, her children still ask where he is when he leaves the room. She implored supervisors to think about the havoc deportations and family separations have wreaked on families, and added that while her family has been able to enjoy happy moments since her partner’s release from ICE custody, his pending immigration case continues to be a source of great stress.

“We still don’t know how many more of these happy moments we will be able to share in the future,” she said. “The uncertainty and stress continues to take a toll on every aspect of our lives.”

The Rev. Anna Lange-Soto called upon officials to think about the community’s deepest values, and asked officials to consider a situation in which two individuals with similar criminal convictions were treated differently after serving their sentences.

“I think that everyone in one way or another would espouse that we want to treat people as we would want to be treated,” she said. “Why would you take one person and help them re-enter society and send another person out of the country? It doesn’t make any sense.”

Karen Calles, an immigrant advocate with the Community Legal Services in East Palo Alto, urged officials to consider whether cooperating with ICE really improves public safety and encouraged them to think about the integral role individuals who fear deportation play in their communities.