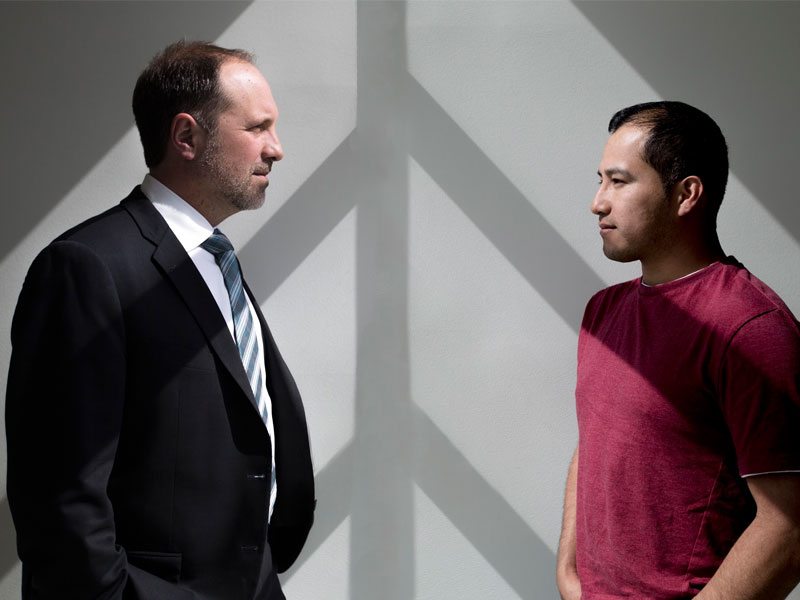 Three new immigration attorneys have joined the city’s Public Defender’s Office, and will each manage around 50 cases per year.

It’s a Tuesday afternoon in federal immigration Judge Scott Simpson’s small, wood-paneled courtroom on Sansome Street, where a Latino man being held in a detention center appears on Judge Simpson’s videoconferencing screen. His attorney, Hayley Upshaw — part of the new immigration defense unit at the San Francisco Public Defender’s Office and a former director of children’s legal programs at Legal Services for Children — introduces herself to the judge.

The man on the other side of the screen asks Judge Simpson if he can be released from detention immediately, if he pays his bond.

“Yes — but then you will have to come in and appear at all of your future court hearings, and if you miss one, you can be removed in your absence,” the judge says, meaning the defendant could forfeit his case and be deported. Simpson, who has served on the San Francisco bench since November 2015, mentions that he’s leaving at the end of May. “If you wait, the new judge might change your bond amount, or decide you shouldn’t have a bond at all.”

“I’d better do it right away!” the man says, signing off. Judge Simpson moves on to the next case.

Upshaw and the rest of the Public Defender’s new immigration unit made their first court appearances Tuesday, May 23, after months of fiscal and political debate among city officials. In January, Supervisor Sandra Lee Fewer asked the Board of Supervisors’ Budget and Finance Committee to set aside $2.2 million so the Public Defender’s office could create a new, 10-person immigration defense team — but the proposal never made it out of the committee. In March, Mayor Ed Lee told Public Defender Jeff Adachi he could use $200,000 in budget savings to hire three new attorneys and a paralegal.

The team started its day in the courthouse’s attorney-client “meeting” room, where lawyers are introduced to detainees via videoconference. After getting to know their first clients in the morning, Upshaw and Gomez represented them in court that afternoon, and planned to meet them in person later in the week.

Traditionally, Ugarte says, immigration defense attorneys chose clients based on criteria such as their likelihood of success, family ties in the region, whether they’re an asylum seeker or particularly vulnerable, and whether they’re a minor or have mental disabilities. But the new team will do something different: Meet the clients who need attorneys, and take their cases regardless of the merits.

“It’s our fundamental belief that everyone has a right to an attorney when they’re facing deportation,” he says. “That doesn’t mean we are going to win the case, but fundamental fairness requires that, in such a high-stakes proceeding, we provide representation.”

Ugarte says each attorney will aim to represent about 50 clients a year. Currently, according to the Public Defender’s office, around 37,000 immigrants are subject to deportation actions in San Francisco’s Immigration Court, and roughly 1,500 were detained during deportation proceedings in the past year.

Most of those — 67 percent — lack a defense attorney. Unlike criminal court, immigration court isn’t required to provide legal representation for people facing deportation. But immigrants who are able to secure a lawyer fare better in the courts than those who wind up having to represent themselves, the office says.

Local legal officials expect that, under President Donald Trump, the number of people facing deportation will increase. When Trump announced his candidacy, he whipped up fears about immigrants, claiming that many Mexicans, in particular, are “criminals” and “rapists.” Early in his campaign, he promised to deport “millions and millions of undocumented immigrants.” He also used the 2015 murder of Kathryn Steinle — by Juan Francisco Lopez-Sanchez, an undocumented immigrant with a criminal history — to argue that sanctuary city policies in places like San Francisco should be abolished.

Deportation efforts were already very active under President Barack Obama, earning him the title “deporter-in-chief” among immigrant-rights activists. Between 2010 and the end of 2014, U.S. Immigration and Customs Enforcement (ICE) says it deported almost two million people — 850,000 of whom were convicted of a criminal act. Even in San Francisco, which has been a sanctuary city since the late 1980s, roughly 7,000 residents were deported each year between January 2010 and February 2015, according to the Public Defender’s office.

ICE recently released new data showing that, between Jan. 20 and April 29 of this year, it arrested 41,898 people nationwide, including 10,934 non-criminals — 38 percent more than the same period in 2016. ICE arrests in the San Francisco region — which extends from Bakersfield to the Oregon border and includes Hawaii, Guam, and Saipan — totaled 1,976 people, including 290 non-criminals, during the same period this year. Last year, ICE arrested 2,006 people in the region, but only 118 non-criminals.

The agency didn’t respond to requests for comment on the new numbers.

Meanwhile, San Francisco continues to fight the Trump administration’s executive order on sanctuary cities, which threatens to yank federal funding from cities that “willfully violate Federal law in an attempt to shield aliens from removal from the United States.” City Attorney Dennis Herrera sued the administration over the order at the end of January. In April, U.S. District Judge William H. Orrick III blocked enforcement of the order, finding that the president doesn’t have the authority to create new conditions on federal spending.

Attorney General Jeff Sessions issued new guidance on the executive order last week, saying cities would not be required to detain immigrants, and those who violate federal law regarding

undocumented immigrants would only lose out on grants from the Department of Justice and the Homeland Security Department, not other sources of funding. That same day, the administration asked Judge Orrick to reconsider his order.

In a press statement, Herrera called the memo a “self-serving document.” “We can’t rely on it, and we can’t trust it. … The memo doesn’t change the constitutional problems of the executive order. That order tried to take away all federal funding from sanctuary cities, and we can’t trust this administration not to make good on its threats.”

For now, at least, Ugarte’s team will focus on representing detainees during their bond hearings, like the one Upshaw participated in on that first day.

“We think we can make a meaningful difference in bond hearings,” Ugarte says. “These cases can take anywhere from four months to a year, and the bond hearing becomes one of the most important parts of a noncitizen case.”

When asked whether immigration courts are Constitutional, Ugarte concedes that — although the cases can drag on for months, and there’s no right to an attorney or a speedy trial for immigrants — the laws at the root of immigration court create “a semblance of due process.” On the other hand, attorneys for ICE have much more information on any given client than the defense attorneys do — and often, attorneys are only able to communicate with detainees through the court’s videoconferencing system, making it difficult to consult privately.

But there are ways in which attorneys can make a big difference.

“The judges have to have a practical approach,” Ugarte says. “Immigration courts are often about someone’s character. Should they be here? Should they stay? That gives latitude for an attorney to provide a good case.”