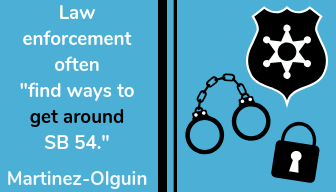 Attorneys following SB 54 say there are loopholes in how it’s written. In contrast, Sheriff Margaret Mims admits although she’s not a fan of the law and thinks it threatens public safety, she’s upholding it.

As an example of such a loophole, some have pointed to the recent case of Ramiro Gonzalez Alvarez, a 32-year-old undocumented immigrant from Mexico who served two months in Fresno County Jail for his third misdemeanor DUI.

After serving his sentence, Alvarez was due to be released from jail. He was being processed in an area of the jail called the “release vestibule,” a small room with a locked door on each end. As he was getting his wallet from correctional officers, two federal Immigration and Customs Enforcement agents were buzzed inside the secured room to detain him, according to Alvarez.

Only correctional officers are able to buzz open the doors, and a sign on the door closest to the public lobby reads, “Entering secured area.”

“(The ICE agents) went inside to wait for me,” Alvarez said in Spanish during a recent phone interview from Jalisco, Mexico.

The agents took Alvarez into custody, and shortly afterward he was forced to sign a self deportation order, he said.

Critics include immigration advocates and attorneys
Despite Alvarez’s undocumented status, some attorneys say his criminal history wouldn’t qualify under the sanctuary law to allow the Sheriff’s Office to turn him over to ICE.

“I think what’s happening is that ... we have a law that allows them to interpret it in a variety of ways, and they are interpreting it in the most restrictive way possible,” said Carter Sears, an attorney who works as an adviser for the Fresno County Public Defender’s Office.

Sears said based on his interpretation of the law, and his observations of how it’s being applied in Fresno County, the sheriff’s office is working around SB 54.

Araceli Martinez-Olguin, an immigrants’ rights project managing attorney at the Community Legal Services in East Palo Alto, said she has heard reports of various law enforcement agencies trying to “find ways to get around SB 54 to skirt its requirements.”

As an example, an Orange County Superior Court Judge on Thursday ruled in favor of the City of Huntington Beach saying the sanctuary law restricts the charter city’s local control.

In 2017, the Bay Area Rapid Transit passed a policy to prohibit cooperation with ICE, though a camera at a station in Oakland captured and sent more than 57,000 photos of passengers’ license plates to a database ICE had access to.

The policy says if another law enforcement agency wants to re-arrest an individual being released from jail, officers may do so after that person “has completed the release process.”

Sears said allowing officers to enter the vestibule area to detain individuals for safety purposes, “blurs the distinction” between a jail release and a transfer of custody. The sanctuary law doesn’t authorize local jurisdictions to bypass requirements by claiming safety reasons, he said.

The Sheriff’s Office “clearly helps ICE arrest virtually anyone it wants from within the jail,” he said.

“Non-citizen clients, even those without a conviction, don’t know if their release from jail will mean liberty, or removal from the United States,” he said. “Many of them are eligible for immigration benefits and relief. Under (the Sheriff’ Office’s) interpretation, there’s really very little left of SB 54.”

Gov. Jerry Brown on Thursday vetoed a bill that would have prevented civil arrests in courthouses statewide, such as those that ICE began to carry out at the Fresno County Superior Court since mid-July.

Furthermore, Duran said he had no record of ICE detaining Alvarez in the vestibule.

Mims, after looking into the case, said Alvarez was not transferred to ICE. Mims says he was released and when the door to the lobby was opened, ICE agents took him into custody. “The door opening to the lobby was never secured with ICE and Mr. Alvarez inside,” she said.

She said “most people are taken into custody in the public area beyond the release door” between a metal detector and an elevator door, “which is a public area.”

Tony Botti, spokesman for the Sheriff’s Office, said the jail wouldn’t be able to release video footage of the day of Alvarez’s arrest for privacy purposes, but he pointed at the vestibule area, saying the arrest happened there. He said it’s “the designated area for law enforcement to re-arrest.”

In an internal email from ICE’s Moises Becerra, dated Dec. 30, 2017, he informs staff about the Fresno County’s policy, and highlights key points, one of which is arresting detainees in the locked area.

“ICE officers will check in at the front lobby where there are two Correctional Officers (CO),” he wrote. “The COs will notify FCJ staff and they will ensure ICE detainees who are processed for release will be at the release vestibule.”

Initially, Mims told The Bee that ICE agents were “allowed into the vestibule for people that the law allows us to transfer custody.”

“There are certain cases and charges (where) we are not allowed to do that,” she said.

Sears, of the Public Defender’s Office, said he previously wasn’t sure how the practice of jail releases of clients targeted by ICE was being handled. But that became more clear when he saw a “client taken out of the secure facility by two ICE agents.” That person was Alvarez, who was identifiable through release dates on the sheriff’s office website.

According to the sanctuary law, a transfer of custody is also allowed when there is a judicial warrant or probable cause by a federal judge indicating the person has “violated federal criminal immigration law.”

ICE spokesman Richard A. Rocha said the agency had “no criminal warrant” in Alvarez’s case. He was “arrested administratively.” Administrative arrests are for civil federal immigration violations. Rocha said Alvarez had been convicted of a DUI in March and had a previous DUI in 2016.

Court records show Alvarez had a third misdemeanor DUI in 2010. The sanctuary law gives local agencies the discretion to cooperate with ICE only for “a conviction that is a felony” for DUI charges.

Alvarez had been “voluntarily returned to Mexico by Border Patrol in 2009 following an illegal entry” into the U.S, Rocha said. He was “returned” to Mexico again in August.

Number of transfers unclear
As of early August, the Sheriff’s Office had reported three transfers to ICE so far in 2018, which Duran said followed a different practice.

The main difference that distinguishes a transfer is that ICE agents detain the individual in the booking area past the vestibule, and walk the detainee out the back door.

Despite ICE agents having to check-in at the public lobby to be buzzed inside the release vestibule area for “releases,” Duran said the Sheriff’s Office doesn’t track how many arrests ICE has carried out in that area.

Rocha, with ICE, wasn’t able to immediately provide statistics of arrests in the vestibule.

SB 54 also restricts local agencies from using local resources for immigration enforcement. ICE agents, at least in two occasions, have been allowed to use restricted areas at the Fresno County Superior Court since a series of arrests that began in mid-July.

Two paralegals with the Public Defender’s Office witnessed an arrest at the courthouse in late August. They believe ICE agents were taking the individual through the courthouse basement, which is a non-public area.

“There is a ramp going down, I’m assuming they were going to the garage,” said paralegal Rachel Gonzalez. “I did see them walking down the ramp.”

Mims said ICE as a law enforcement agency can park in the sheriff’s garage, although her office had previously said ICE agents were allowed only in public areas.

SB 54 author concerned
SB 54’s author, Kevin de Leon, wasn’t pleased to hear how the law is being implemented in Fresno County. “If that in fact is happening, that is a very clear attempt to undermine the law,” he said, referring to how releases with ICE are being handled.

The former state senate president pro tempore said if the sheriff’s office is manipulating the law, it could find itself in contempt by a judge.

Mims believes she’s in compliance. “I’m not going to knowingly violate any law,” she said.

“The guidance advises the proper role of staff at public facilities if any agency, official, or officer, whether local or federal, seeks to engage in immigration enforcement,” according to a statement from Becerra’s office.

The policies will let agencies know how to implement the sanctuary law properly, but it won’t tell them “exactly what to do,” Becerra had said earlier in the week.

“We are giving them a sense of how to do it right and then it’s up for them to make sure they implement it right,” he said.