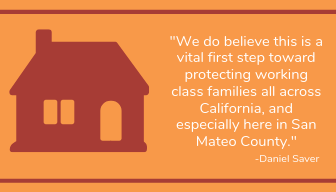 A deal refining a bill designed to prevent rent gouging drew cheers from the local author as well as advocacy organizations, while other critics stand firmly opposed to the proposal.

Lawmakers amended Assembly Bill 1482 to include annual 5% rent caps plus inflation with a 10% maximum increase, lowering a previous 7% threshold, according to a deal announced by state lawmakers Friday, Aug. 30.

“The bill will protect millions of renters from rent-gouging and evictions and build on the Legislature’s work this year to address our broader housing crisis,” said the statement also signed by state Sen. Toni Atkins, D-San Diego, and Assemblyman Anthony Rendon, D-Sacramento.

“We do believe this is a vital first step toward protecting working class families all across California, and especially here in San Mateo County,” he said, noting his comments are measured in the absence of an official document entirely detailing the extent of the amendments.

Saver said his organization has worked extensively on the bill’s design, and supports its amendment with hopes that it strengthens the likelihood that the proposal will eventually reach Newsom’s desk.

While the new deal is in renters’ favor by lowering the allowable rent increase from 7% to 5%, it changes the exemption for newer properties from those built within the last 10 years to within the last 15. All single-family homes not owned by corporations or investment trusts would also be exempted, as well as duplexes in which the owner lives in one of the units.

The rent caps would sunset in 2030. The cost of inflation would be determined on a regional basis. It also includes a just cause evictions provision, which was previously carried in a separate bill.

A rent cap is different than rent control, which California law bans on apartments built after 1995 and single-family homes. An effort to lift those restrictions failed at the ballot last November.

Saver framed the amended cap bill as an effort to level the playing field between tenants and landlords, as tensions between the two sides have risen with rent prices across the state amidst the housing crisis.

The California Apartment Association, which previously opposed the initiative, said its position moved to neutral following the arrangement brokered prior to the extended Labor Day weekend.

“The California Apartment Association leadership thought it important to be part of the solution. We now, of course, need to address the largest issue facing the state, which is the production of affordable housing,” said Debra Carlton, senior vice president of state public affairs in a prepared statement.

Since proposing the bill, Chiu steadfastly maintained his aim is to only prevent exorbitant rent hikes which lead to displacement while not constricting the rights of landlords to turn a profit on their property.

The Building Industry Association is also neutral on the bill, but some more staunch critics of the measure remain in opposition.

“The proposed version of AB 1482 headed to the Senate floor will not incentivize production of rental housing or help more people find an affordable place to live,” the California Association of Realtors said in a prepared statement.

The group representing state Realtors feared the bill would discourage development of new units, and had been working with lawmakers to reach consensus. When its proposed amendments were not adopted in the new version, the organization opposed the initiative, according to a press release.

Recognizing the influence the Realtors group keeps in Sacramento, Saver said his organization remains cautiously optimistic the rent cap proposal will clear the remaining hurdles blocking its advancement to Newsom.

“We are not counting our chickens before they hatch,” said Saver.

Chiu, for his part, expressed his appreciation to the collaboration between lawmakers and other interest groups in building a bill which he believes will go far to benefit as many as 8 million renters across the state.

“I am grateful for the work of our legislative leadership and the Governor to get us to this place. These amendments balance the need to protect tenants from large rent increases and unfair evictions while still passing a bill that allows property owners to make a fair return,” he said in an email.

The Associated Press contributed to this report.