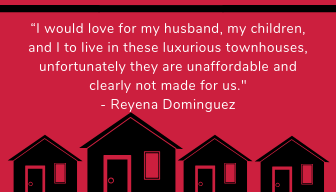 Mountain View, CA: The Royal Viking Tenants’ Union, along with PACT, Cafecito, and other supporters, are asking Mountain View’s City Council to reject the development permits for the
demolition project at 2005 Rock Street. The developer has requested Council approval to demolish 20 rent-controlled apartments in order to build 15 luxury townhouses, which would displace over 75 current residents including nearly 30 children. Nearly all of the residents are middle- and lower-income Latinos. The Council must reject the proposed demolition to preserve the diversity of Mountain View and to prevent a disproportionate impact on people of color, the residents say.

“It makes no sense to demolish housing in the middle of a housing crisis,” states Guadalupe Rosas, an organizer with PACT who has been working with the Tenants’ Union. “The project would result in a net loss of housing units. The diversity of Mountain View is under threat by these developers. The Council needs to take a stand with its constituents rather than continue to rubber-stamp these projects.” Since 2014, the City Council has approved the demolition of hundreds of apartments, likely resulting in the displacement of thousands of Mountain View residents. Many of these naturally occurring affordable apartments are to be razed to make way for new luxury developments. “I would love for my husband, my children, and I to live in these luxurious townhouses, unfortunately they are unaffordable and clearly were not made for us,” said Reyena Dominguez, a member of the Tenants’ Union and a leader with PACT. “In fact, at one point the developer told us that these townhomes were being built for “workers.” To this, we answered, we are workers! Are we not the right kind of workers?”

In addition to demanding that the Council reject the demolition of the 20 homes at 2005 Rock Street, the Tenants’ Union and supporters seek a temporary moratorium on demolitions of apartments within the city. This would preserve the status quo while also giving the Council time to consider various policy options to address the demolition crisis, including amending the zoning code, prioritizing new development on parcels that do not already contain housing, or exploring options for the City or nonprofits to purchase multifamily buildings to remove them from the speculative market.