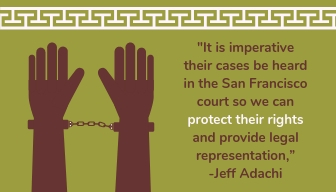 Filed by the San Francisco Public Defender’s Office, Pangea Legal Services, and Community Legal Services in East Palo Alto, the “habeas” petitions argue that Immigration and Customs Enforcement’s (ICE) sudden transfer of the community members to immigration jails in Washington state and Colorado violated their due process rights and denied them access to legal representation.

“ICE’s transfers of community members to faraway, for-profit immigration jails deprive our clients and their families of legal representation and the support of their families and community. It is imperative that their cases be heard in the San Francisco court so we can continue to protect their rights and provide legal representation,” said San Francisco Public Defender Jeff Adachi.

As the legal filings explain, the transfers interrupted immigration hearings which had already been scheduled in San Francisco, needlessly prolonging the community members’ detention and waste court resources. The community members are now separated by hundreds of miles from family members, attorneys, and vital witnesses for their immigration cases who may be unable to travel – significantly jeopardizing due process.

Additionally, ICE moved these community members to immigration jails where nine in ten people do not have legal representation, which is essential for navigating an immigration system frequently described as maze-like. Experts have noted that there is no other area of U.S. law where detained people must advocate for their freedom against trained government lawyers without being guaranteed assistance from an attorney.

“Habeas Corpus” is a time-honored legal procedure that prevents the government from detaining people indefinitely without cause.