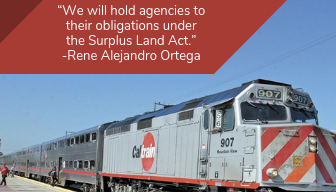 Caltrain has been negotiating with Sares Regis for years about a transit-oriented development there, and while nothing is set in stone, the plan is to remove an underused parking lot sitting on 2.7 acres at Concar Drive and Pacific Boulevard in San Mateo and build 189 units in its place.

Caltrain is simultaneously working on a transit-oriented development policy and board member Dave Pine, also president of the San Mateo County Board of Supervisors, said previously that policy will likely include a 10 percent to 20 percent affordable requirement for developments on Caltrain land.

But housing advocates say that amount is not enough and argue Caltrain is violating the Surplus Land Act by only negotiating with Sares Regis for the Hayward Park Station project.

“Caltrain is not at liberty to define its own affordability standards in consultation with a private developer of its choosing. Rather, it must follow the Surplus Land Act’s formal procedures — requesting bids from developers that plan to include at least 25 percent affordable units, negotiating with them in good faith, and giving priority to the developer that proposes to build the greatest number of affordable units at the deepest level of affordability, even if that means leasing the land at a rate below fair market value,” Rene Alejandro Ortega, senior housing attorney for Community Legal Services in East Palo Alto, wrote in a letter to Caltrain.

That letter was signed by Evelyn Stivers of the Housing Leadership Council, Michael Rawson with the Public Interest Law Project and Victoria Fierce of the California Renters Legal Advocacy and Education Fund.

Ortega argued in the letter that Caltrain’s actions also violate state and federal fair housing law and local affordable housing requirements, and he threatened litigation if Caltrain fails to comply.

Caltrain spokesman Dan Lieberman said that the Surplus Land Act does not apply to the Hayward Park Station proposal.

“The California Surplus Land Act does not apply as this property is being leased, not sold, nor was it law when this project began,” he said in an email.

Ortega countered that the law has been in place since 1968 and while it has been amended over the years, it outlines a process to which Caltrain is not adhering.

“We disagree with [Caltrain’s] interpretation,” he said. “We will hold agencies to their obligations under the Surplus Land Act with any tools available.”

Lieberman reaffirmed Caltrain’s commitment to affordable housing and said delaying the project would be “counterproductive” and construction costs will rise.

“Delaying the creation of affordable units on this property would be counterproductive for the county’s housing and transit needs, so Caltrain intends to move forward and deliver a quality project complete with affordable housing,” he said. “Caltrain is pursuing the Hayward Park project in order to enhance our service by providing housing opportunities to Caltrain riders that will help to alleviate congestion in our region. This has the added bonus of helping to alleviate the housing crisis in San Mateo County.”

Lieberman said a finalized deal with Sares Regis is expected to be ready for a vote by the Caltrain board in October or November.

“The board is interested to move this process forward as quickly as possible,” he said.

He also said the TOD policy will go before the board next year.